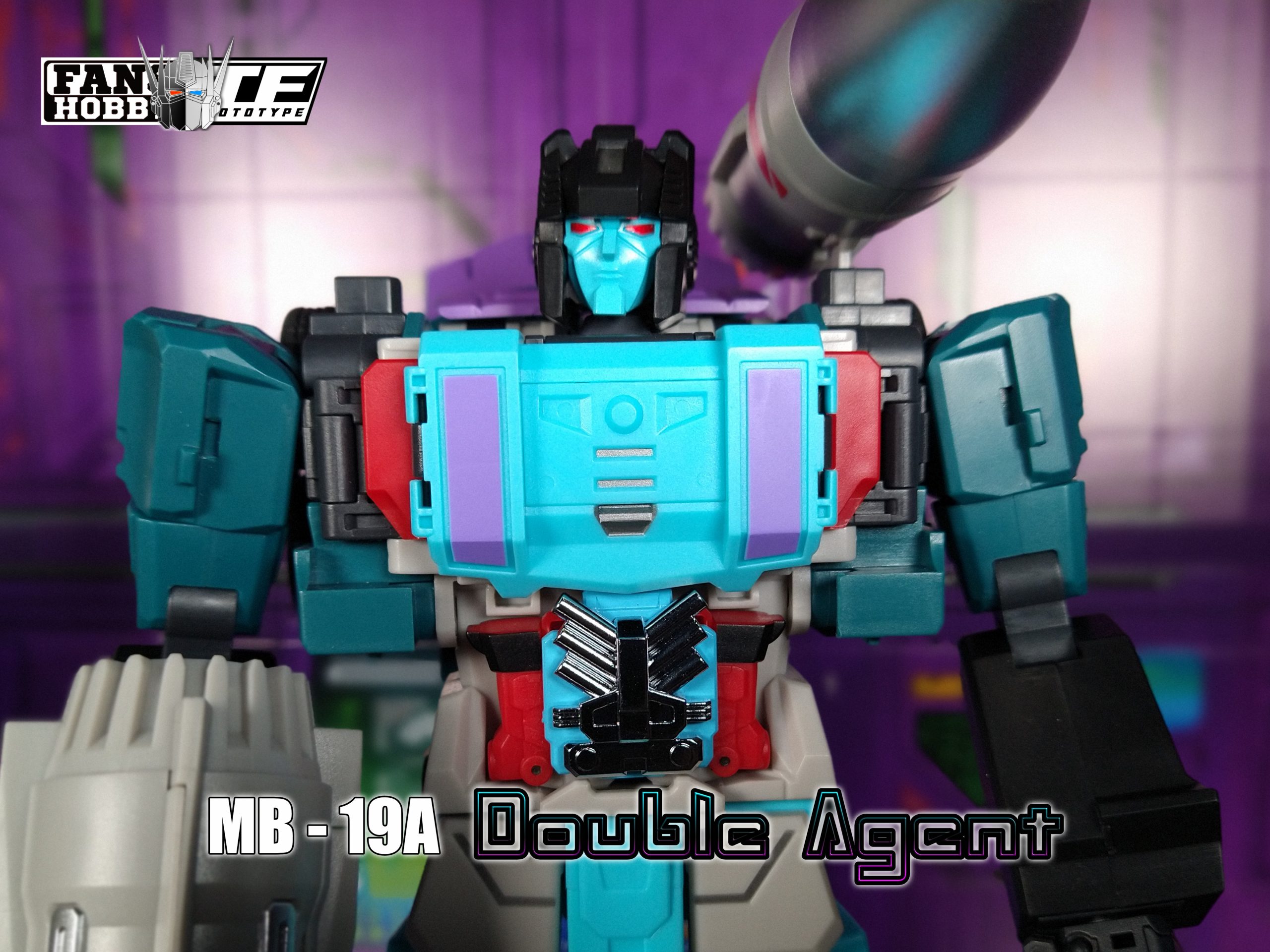 This a Masterpiece Scaled Double Dealer (Or Double Clouder) by Fans Hobby MB-19A Double Agent. Please also note that MB-19B will have purple wings / purple back of the truck just like in Generation One. This one is very G1 accurate in the main robot mode but this brings up a few subjects we should discuss right away.

The original Toy / Character had Knok and Skar both being GodMasters / PowerMasters binary bonded with Double Dealer / Double Clouder. One would unlock the robot mode while the other would unlock the bird mode. Fans Hobby has added many options you can choose to acknowledge or ignore completely as if they do not exist making your purchase more G1 which I think is a great idea to appease many with fewer products.

With all that being said let’s dig into the now-updated quad changer. Quick side note to everyone as you should watch Skar as he is sharp and pointy, it’s glorious.

Once again I could say the packaging is done in a very retro-styled way to represent Transformers packaging from around this era and this statement would be true but we have to point out that this is Generation 1 based and has the original style that we grew up on. They have done a spectacular job on the packaging and it is some of my favorites yet. They even have both Power-Drivers on display in the window, which I find to be a very nice touch.

MB-19 (A & B) are a sort of ICBM mobile launcher just like the original toy was. When you first remove MB-19 (A or B) you are probably going to notice the weight of this guy. It will not seem so heavy later on when in robot modes as the weight is better distributed but in this mode this guy is brick and I think that is great. Real rubber-tired, an opening cockpit for the driver, LEDs in the missile for gun effects or missile launching, the list just goes on. They put a lot of effort into what is now a quad-changer and it shows.

This is probably my favorite mode as it recreates the original designs fairly accurately making it to check all the boxes in the list. This includes an optional faceplate that is silver in case you need a GodMaster and not a PowerMaster. I have left my blue face on for two reasons, it is faithful to the original I seen the most and the second is that the sliver face reminds me of God Armour a bit (Fans Hobby’s version of God Bomber). Articulation I would say is fair for Fans Hobbys’ chunky bots but I have to point out the additional flaps that fold down behind the knee while in this mode they included just to give us a bit more range on the knee bend, it was absolutely needed and well done in execution. It’s these little details that make this the solid bot I feel it is.

Okay, surprisingly I feel this mode is pretty good. I did not expect Fans Hobby to do a bad job it was just a hard concept to pull off. This mode is another brick but with wings this time and it is faithful to the original once again but with some articulation for once. And I kind of dig the bird’s head sculpt. This will most likely not be the mode I keep him in but with the stand adaptors, it is a real option. I also want to point out that the stand adaptors are also a nice touch. Very few of us will keep this guy in this mode yet they went out of their way to include this to cater to a minority of buyers, I dig this! Thank you Fans Hobby for considering the fans, huge shout out to them for doing this.

This new robot mode I believe is meant to represent the Decepticon side of Double Agent. This is also a panel on the chest that was shown in the instruction booklet that is easy to miss but if you flip it around as directed during transformation you see an outline for a Decepticon faction symbol. With legs now rotated around, the chest being different, wings showing in bot mode, and the all-new head that is hidden in the bird’s head is pretty awesome. Both bot modes have a deep red metallic eyes.

The Power-Driver transforms from engine block to bot and back again like the GodMaster / PowerMaster of yesteryear. It has some posability to this guy but nothing major, no double-jointed parts but enough to keep you toying with it. Nice chrome accents on the engine parts with a nice blue paint added to make him blend with the chest when combined.

The Bat Power-Driver is meant to represent Skar having a nice little surprise and that he has an added robot mode to compliment his engine block and bot modes, this emulates Double Clouder’s GodMaster as seen above. I think this was done just because of Fans Hobby’s initial Power-Driver design but I also feel it fits in perfectly with the changes they have made to this character.

Fans Hobby MB-19A Double Agent is an awesome bot to add to your collection if you are looking for G1 aesthetics or even a fan of what they have added. If you are an IDW guy this may not be the release for you. I believe it will set the standard for MP Double Dealers / Double Clouder from here on out. Future efforts may not be able to top what has been done here and I realize that may sound crazy to some of you reading but think about all that has been added here.

You can now have a robot mode and an alt mode for each faction of the war. The Decepticons have animal alt modes and robot modes, now including Skar. Knok can drive the missile launcher alt mode while Skar is the engine in the back yet while in the bird mode, Knok is hidden in the chest area and Skar is free to fly and roam with the bird alt mode.

Silly as thinking this all out maybe it ties and ties up a lot of loose ends with the character in my eyes. And fans of the true nature of this character can still get all they want by ignoring these features exist and can even go a step further by ordering the MB-19B variant. The designs are fairly faithful to the original and I have really enjoyed being able to check this guy out for our readers. Now you must decide if this bot or even this variant is right for you. This is Tec and until next time please be kind to one another.

This is not a a paid review. I was sent this product pre-release to show it off to our viewers and if we have suggestions give them feedback where needed. I am not paid or under any contract to say anything. What I do say is honestly what I feel at that time. My thoughts and opinions will change over time as must anything to progress. I hope you enjoy.

TFPrototype is proud to be sponsored by Agabyss. Be sure to click above and check out what they has to offer!

The review has been made possible by Fans Hobby, They are a company that listens to their fan base and I have really enjoyed working with. Click above to see what they have to offer.

TFP proudly uses FEXT Hobby’s FEXT System backdrops. Click above to see what they have to offer!