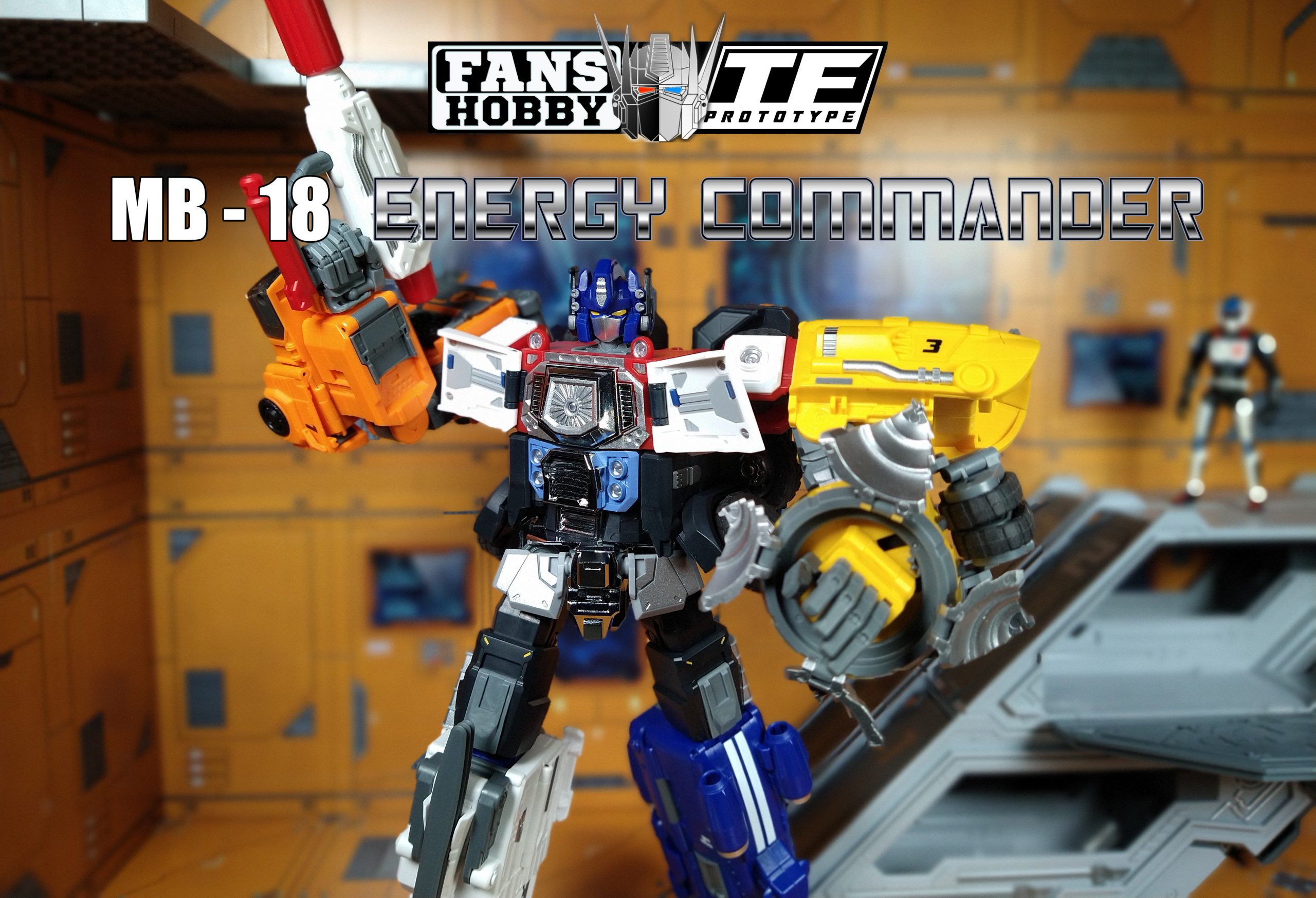 This a Masterpiece Scaled Superlink / Energon Optimus Prime by Fans Hobby. The original release was Semi Cab with Trailer and four Mini-Vehicles. The Cab transformed into the main robot but could also combine in various way to make a larger robot. Each one of the Mini-Vehicles could combine into either or arm or a leg on either right or left side. It was a good design done fairly well at the time for a toy. This takes that concept to a whole new level adding details the original could only dream of. Let’s get started and check this bad boy out!

Packaging is some of the best I have ever seen from Fans Hobby as each vehicle is in separate bags and also foam bits were placed inside the trailer to help ensure the Mini-Vehicles are not damaged during transport. Clam shell of course and probably one of the sturdiest I have seen in awhile. The artwork on the box is very well done with product shots all over and a big nod to the original series and box packaging style.

The first thing you will notice about the Cab is all the die-cast in this release and I have to admit that makes me so happy to see return. I am a long time die-cast fan and believe any release could be a better release with die-cast but back to the bot at hand. The Cab also shows off some of the finer details like movable Mirrors and the back of the Cab is sealed off rather nicely with no weird satellite head bits on top. The Cab is heavier than you would expect upon first picking it up which is always a welcome surprise. Sporting silver rims and real rubber tires this guy rolls well as to be expected.

Now Fans Hobby had a lot working against them when making this bot as anyone who has owned this bot or collected for awhile probably has some not too endearing terms or pet names for this guy. It was basically some tiny feet and tiny legs with some massive thighs and a humungous chunk of a body. The arms were probably the only favorably proportioned parts of this bot originally but enough about the original as Fans Hobby has not only done a fantastic job but this may be some of Fans Hobby’s best work to date. The feet are still small but they have chiseled away and defined this new iteration until it barely resembles the original. Now as far as transformation it exceeds todays standards while keeping the gimmicks involved with the original and adding a few of their own as they see fit. I cannot stress how impressed I am with this release by Fans Hobby.

This is another area this guy shines in as he just unbelievable with so many options and different way to display him. He is very posable but when dealing with these odd combiners I do not ever expect to get a full double knee bend or sometimes not even a full double elbow bend, this guy is limited on the knees a bit but still has a great deal of articulation. Also when thinking about the original and what design choices they went with I fully understand and support what we did get, I feel they went above and beyond.

Each of the four vehicles can become either an arm or a leg for combined mode and they be either the left of the right side as mentioned earlier. So no matter what combination you think of it can pulled off now with a good amount of style added to it. The Driller has extra options when acting as a Combined Mode Arm as the drill can split open to expose a fully posable hand. Also I want to mention that the Driller has actual working tank treads which is nice. The thought and design work that went into these little guys is absolutly amazing.

The Trailer connects using a swivel type connection point so the Cab can even go uphill without any issues which I think is an ingenious design. The Trailer also holds all four of the Mini-Vehicles. The Driller is sort of a tighter fit than the other due to the tank treads. While in Trailer mode it has an optional stand to Display the Trailer at proper height without the Cab (this is a feature I wish all Trailers had). The Trailer can be split apart in to eight parts total (4 Cabins, 1 Bumper, 2 Wheel Sets, and and 1 connection swivel). You then can combine these in many different ways to make a base however you want it. This adds a ton of options to this figure alone giving a great backdrop when displaying you figure.

This is not a release to pass up and I believe over time we will find out this is one of their top tier releases that may even sell out (I never like mentioning selling out as I do not know the numbers made on these guys as I am sure as Fans Hobby has grown they have also probably bumped up production numbers but it still can happen and may). This guy hit many checkboxes for me that I personally felt this bot had to fill to be a success and then some. I feel you really get a lot of bot for your money on this one. If this is a guy you have been eyeing and just on the fence do not waste any more time and place your order. This is Tec and untill next time please be kind to one another.

TFPrototype is proud to be sponsored by Agabyss. Be sure to click above and check out what they has to offer!

The review has been made possible by Fans Hobby, They are a company that listens to their fan base and I have really enjoyed working with. Click above to see what they have to offer.

TFP proudly uses FEXT Hobby’s FEXT System backdrops. Click above to see what they have to offer!